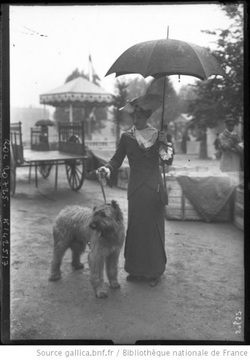 The Briard is very intelligent, gay and lively with a rugged appearance. The Briard’s temperament should be fearless with no sign of aggression or shyness. The Briard head should work out at  Forty percent as long as the dog's height at the withers (top of the shoulders), it is large, rectangular, and well-covered with hair and has a large, square black nose. The coat forms a long, full beard and mustache and grows over the eyes in an arch from the brow creating the fall. The Briard often uses his large head to help move recalcitrant sheep -- or children and other dogs.


Although the feature is common to many French sheepdog breeds, the Briard has double dew claws on the hind legs. Dew claws are extra toes -- vestigial remnants of the ancient ancestors of dogs that had six toes instead of four. The best dew claws are real toes, placed low on the leg near the other toes to give the dog a wider foot for turning quickly. The dew claws on the rear legs should never be removed; it is a disqualifying fault in the show ring to have fewer than two dew claws on each hind foot. There are often Briards born without both dew claws which does not cause them any problems. The dew claws do need regular clipping as they do not get worn down naturally unlike the other nails.


Click on link below for the full information on the  Breed Standard
http://www.the-kennel-club.org.uk/discover dogs/pastoral/p844.htm