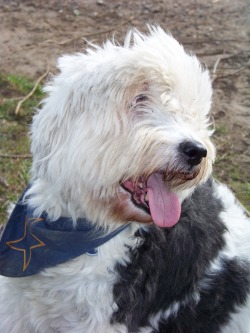 Bailey joined our family after a "just to look" visit to Plymouth Dog Rescue Centre in 1996.

He was 7 months old and sharing a stone kennel with a Bull Terrier who couldn't be rehomed at all.
He looked wet, forlorn and was cowering in the corner, we left the centre both silent.
When we arrived back home, within minutes we decided we had to return and rescue him.

He was an Old English/Collie and had been kept in a top floor flat, in a tower block. He had been kept outside on a balcony, ill treated and neglected.
We soon won his trust and he became the inseparable companion of our previous dear old Briard Bonnie (Bonkers'). He pined dreadfully when she died at 14yrs of age, hence the acquisition of a new sister 'Arundall Saphira'.

He was 17  years young, almost blind, partially deaf (selective as he can hear a sweet wrapper yards away) and has Horners Syndrome. Despite that he got around quite well and used to be able to hold his ground in a tussle match with Neena, although she is definitely 'mistress of all she surveys' he still tried to be the boss without success.

He has been,  a great source of amusement, a real clown which did not diminished in his old age. Bailey was often found to be in the garden with Neenas' first litter which earned him a new nickname of 'uncle Bailey'. When he was able to go for a walk in his latter years he always still managed to find mud and get in it!!!

Everyone that met Bailey fell in love with him, you could not help but love him
Salieri Briards, Occassional home breeder of Briards in Lincolnshire